In August of 1929, and under the title of the Little River Mission Club, fourteen men and women undertook the task of forming a new parish. This group of dedicated Catholics found a meeting room in a store on Northeast 79th Street, near Second Avenue, and began planning fundraising events for a new church building. At that time, the Little River area was under Gesu Parish, which is located in historic downtown Miami. Bishop Barry, who served as Bishop of Saint Augustine from 1922-1940, agreed that a separate parish could be created if a census showed one hundred and fifty Catholic families in the area who could support such an endeavor. Three lots were purchased on Northwest 2nd Avenue and another in the rear at Northwest 75th Street. In April of 1930, ground was broken for a church, and the first Mass was celebrated on that spot in a wooden structure on July 20, 1930. Father William Wilkinson, S.J. of Gesu Church was the celebrant and Monsignor William Barry, P.A., pastor of St. Patrick’s Church in Miami Beach, preached the homily.

In October of 1930, Father Patrick J. Roche, born November 6, 1896 in County Limerick, Ireland, was appointed the first pastor of the young parish. The boundaries covered the whole area from 36th Street North to the Broward County line and from Biscayne Bay West to the Dade County line. In the summer of 1931, the parish began construction of a rectory adjacent to the church, which was completed in October of that year. A parish hall was located north of the rectory and was used in January 1935 for the first time.

One week before Christmas in 1936, the church was moved to a property that had been purchased on the east side of Northwest 2nd Avenue, the site of the present Cathedral. The wooden church was then remodeled and enlarged by moving the sanctuary back and adding two wings. Capacity then reached 600 persons. The first ceremony in the renovated church was the Sacrament of Confirmation administered by Bishop Barry in February 1937.

In 1953, Fr. Roche retired and Father Patrick J. Donoghue was appointed pastor. Due to the growth of the parish it was decided in 1954 that funds should be raised for a new church structure. The groundbreaking ceremonies were held in 1955, the twenty-fifth anniversary of the founding of the parish, with Archbishop Hurley officiating. The design of the new church was drawn from various styles based on the collaboration of Archbishop Hurley, Bishop of St. Augustine (1940 -1967), Monsignor O’Donoghue, architect Thomas J. Madden, as well as Cardinal Edward Mooney of Detroit, who, as a friend of the archbishop, was well-versed in architecture matters. Cardinal Mooney himself dedicated the new church building on January 27, 1957.

Upon completion in 1957, the design for the new church was not based on any one particular style, but it drew elements from various architectural periods. The basic structure of reinforced concrete sits upon solid rock with steel rigid frames supporting the walls and roof. Exterior walls were constructed of concrete block stucco outside and plastered inside. The roof was covered with fired clay tiles, and the concrete dome, rising seven stories above the altar, was covered initially with lead and later with colored-glazed tile. The design included a southwest corner tower rising more than twelve stories and capped with a glazed tile dome and metal cross. The main portal was formed by two great mahogany doors, framed in a massive cut keystone frame thirty feet high. Brass hinges held the doors that were further enhanced by a pattern of brass bolts and plates. Over the altar, the ceiling rose to a height of seventy-six feet, where its roof formed the underside of the concrete dome. The nave, measuring one hundred and forty-feet long, eighty-two feet wide and five stories high, included a seven-foot main aisle and two five-foot side aisles. The nave floor was terrazzo, and the nave itself was flanked by five arches supporting the aisle roofs. Lights suspended from the ceiling each measured five feet in width.

A new phase in the life of the parish began in 1958. On August 13th, sixteen counties of Southern Florida were detached from the Diocese of St. Augustine to form the new Diocese of Miami. St. Mary’s Church was announced by the Vatican as the new cathedral. On October 7, 1958, Auxiliary Bishop Coleman F. Carroll of Pittsburgh was installed as the first Bishop of Miami in ceremonies presided over by Archbishop Francis Keough, Archbishop of Baltimore. Shortly thereafter a vigorous program of renovations for the Cathedral began.

In 1960, a consecrated bronze bell, weighing more than two tons, was placed in the Cathedral tower. A new pipe organ was installed by Moeller Company, Inc. of Maryland. The marble bishop’s cathedra, stained glass windows, and plaques bearing both the Popes’ and Bishop’s coats of arms were added. By 1965, a varicolored Italian marble floor and altar had been added. Over the choir stalls, known as the presbyterium, was placed a continuous glass mosaic depicting scenes from the life of Mary. It was executed in Chartres, France by the noted artist, Gabriel Loire. Ceramic portraits depicting the Mystical Marriage of Mary and Joseph as well as fourteen Stations of the Cross were erected on the walls. The artist Biancini fashioned them in Faenza, Italy. Gabriel Loire once again used his talents in the Chapel of the Blessed Sacrament where he took the theme of the Annunciation and the Birth of Christ and formed a modern stained glass wall of faceted glass. The tabernacle, made of semi-precious stones and enamel cartouches, illustrate scenes from the life of Christ. Rising behind the tabernacle is a magnificent tapestry, crafted in Bruges, Belgium, depicting the story of the two disciples on the road to Emmaus. The dome of the Cathedral was crowned by an open cupola of gold and blue anodized aluminum, surmounted by a cross. Shimmering in the sunlight, for years it has attracted attention and admiration of motorists and passing aircraft. Multi-colored Spanish tiles sit upon the roof and give prominence to height and majesty of this sacred building. In 1966, Monsignor David Bushey, the newly appointed rector, completed work on a new rectory with new offices and living quarters.

On June 13, 1968 an overflow crowd filled the Cathedral of Saint Mary as Bishop Carroll became the first Archbishop of Miami and Metropolitan of the newly-created province. In 1968, Auxiliary Bishop of Miami John J. Fitzpatrick was ordained to the episcopacy and on January 25, 1972 Auxiliary Bishop Rene H. Gracida became Miami’s second auxiliary bishop. Both of these consecrations took place in the Cathedral.

On September 17, 1976 Bishop Edward A. McCarthy of the Diocese of Phoenix was welcomed in Saint Mary Cathedral as the newly appointed Coadjutor Archbishop of Miami. He later succeeded Archbishop Carroll on July 26, 1977 and presided over the funeral of the beloved Archbishop that same week, surrounded by the clergy of the Archdiocese and assisted by Monsignor John Donnelly who was the rector at that time. Due to the number of participants, the episcopal ordinations of Miami Auxiliary Bishops, Bishop John Nevins and Bishop Agustin Roman, took place at the Miami Beach Convention Center on March 24, 1979.

On November 20, 1983, Archbishop Ambrose DePaoli a student of Saint Mary’s School, was ordained to the episcopacy at the Cathedral by Cardinal Agostino Casaroli, the Vatican’s Secretary of State. Three years later Auxiliary Bishop of Miami Norbert Dorsey, C.P. was ordained a bishop at the Cathedral on the Feast of Saint Joseph, March 19, 1986. Monsignor Gerard LaCerra, rector, continued to coordinate Cathedral events while always mindful of the ever-changing neighborhood needs and the responsibility of reaching out to the local community. 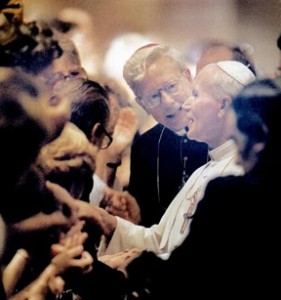 His Holiness Pope John Paul II chose the Cathedral of Saint Mary as the first venue of prayer during his 1987 Pastoral Visit to the United States. On September 10, 1987, after his arrival at Miami International Airport, the Holy Father came to the Cathedral of Saint Mary and met with priests, religious, and ecumenical leaders. He presented Archbishop McCarthy and the Cathedral with gifts of a gold chalice and paten as well as a signed portrait. After speaking on the subject of reconciliation and the importance of the Sacrament of Penance, Pope John Paul II walked through the northwest doors and greeted parishioners and neighbors speaking in English, Spanish and Kreyol.

On December 20, 1994-2010 Archbishop John Clement Favalora, former Bishop of St. Petersburg, was greeted at the Cathedral doors by the rector, Monsignor Andrew Anderson, and was installed as third Archbishop of Miami. As in 1979, due to the large number of participants, Bishop Thomas Wenski and Bishop Gilberto Fernández were ordained as auxiliary bishops of Miami on September 3, 1997 at the Miami Arena. On Christmas Eve, 1999, Archbishop Favalora, in union with the Holy Father in Rome and dioceses around the world, opened the Holy Doors of the Cathedral, locally inaugurating the Jubilee Year. Thousands of pilgrims came to the Cathedral during the year 2000 to gather and pray. During the Jubilee Year, the Cathedral saw the visit of Cardinal Francis Arinze who presided over Holy Week events. On the Feast of the Epiphany in 2001, Archbishop Favalora blessed the newly designed altar that contained the mensa or top of the original altar and the new ambo. He also blessed the new Cathedral Parish Center that offered more needed office space and a chapel of the Eucharist for the ever-growing Cathedral parish. On February 27, 2001, his Eminnece Nasrallah Peter Cardinal Sfeir, Maronite Patriarch of Antioch and All the East came to the Cathedral for a prayer service on his pastoral visit to Miami.

On January 7, 2004 Auxiliary Bishop Felipe de Jesús Estevez was consecrated to the episcopacy at the Cathedral. Several weeks later, on January 28, 2005, Archbishop Favalora welcomed the American Cardinals for a special Mass to promote education. The following year, on June 13, 2005, the funeral mass for the second Archbishop of Miami, Edward A. McCarthy, took place. Auxiliary Bishop John G. Noonan was consecrated at the Cathedral on August 24, 2005. In August of 2007, the Cathedral Parish and School welcomed the Sisters – Servants of the Pierced Hearts of Jesus and Mary.

On June 1, 2010 the Most Rev. Thomas Wenski was installed as the fourth Archbishop of Miami.

On March 19, 2014 the Most Rev. Peter Baldacchino was ordained to the order of bishops at St. Mary’s for service as an auxiliary bishop of Miami.

Over the years Saint Mary Cathedral Church has been a “beacon of light and a harbor of hope” to the community of South Florida. The archbishops, bishops, priests, deacons, religious and laity who have labored in the Cathedral Parish have kept the promise of the Gospel alive and present.