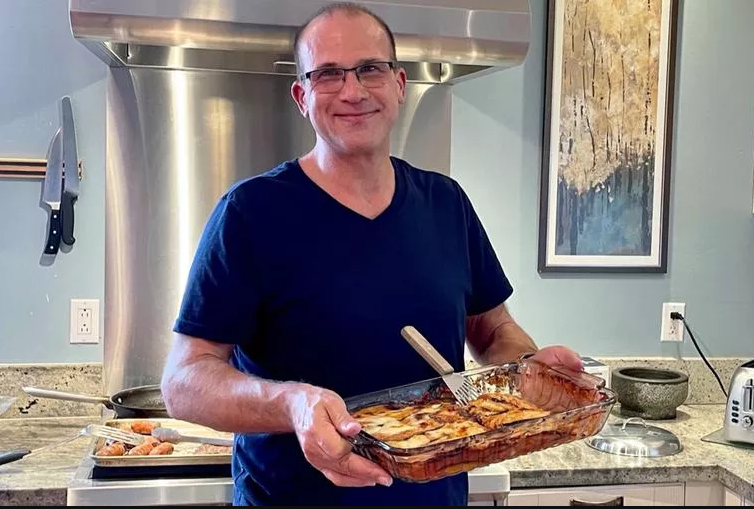 A native New Yorker who spent his childhood in Pembroke Pines, Florida, Father Christopher Marino is now the very active rector of St. Mary’s Cathedral in Miami and a local fire chaplain. And before his busy parish life, Father Marino was once a restaurant critic and people thought of him as a cook. “I reviewed restaurants for the Miami Herald,” he said, “and even did that while the chaplain at a Catholic school.”

He links his food and cooking passion to his family. As he noted, his parents were seriously hard workers, operating a fish store and having their son wait on customers.

“I grew up in the fish business,” he said, “and I was always surrounded by food. My mom and grandmothers were always in the kitchen. … Italian-American favorites, seafood. Food was our livelihood, and it was also our recreation and our refreshment. And when we had gatherings at our house a lot of people came, and we were surrounded by food.”

But he also attributes his faith to growing up with parents who were authentically Catholic and lived their faith publicly. “We had a wonderful priest in our parish. I asked my mom, ‘What is a priest?’ and she said a priest is a man who brings Jesus to earth. And that a priest was a happy man. My vocation really started there.”

His mother was particularly involved, he recalls, as she was a catechist and close to some religious women. Once in a while he attended Mass with her. When his mother would go to the parish convent, “I would always ask her, ‘What is a nun?’” he said. “She would say nuns give their lives to serve God and people. … They gave complete and total service to the Lord. And they, too, were happy. For me, vocation, service and happiness were always connected.”

Father’s cooking passion kicked in before his Confirmation when he came down with mononucleosis. “I had to stay home,” he said, “and I would watch Julia Child on TV. And that’s when I tried to cook on my own and that started my whole life of cooking. Now I cook at least every Sunday — for the archbishop, for priest friends, guests. We have a full house and are fortunate to employ a cook during the week, but on the weekends, I always cook.”

His parish also showcases Father’s cooking, as its women’s guild has auctioned off dinners with Father Marino preparing the meals. “I will ask them in general what they like,” he said, “and, thankfully for me, they ask for Italian. Our parish is in the inner city — multinational, but I wouldn’t dare to cook Guatemalan or Haitian food.”

Of course, thanks to his food-intense background, Father Marino has his own list of favorite foods, starting off with grilled foods, including meats and vegetables.

“I grill because I have a nice patio and can bring people around the barbecue while talking outside,” he said. “So I usually grill on Sunday nights, steak (ribeyes when they’re on sale), chicken or ribs. And I also prepare a few Italian-American dishes. … At least once a month, I make a Sunday gravy with pig’s feet, sausage and ribs. In between Masses, I make the sauce, then go back, greet the people, hear confessions, then run back to the kitchen.” In addition to food and worship he spends a lot of time outdoors: the ocean, canals and the Everglades.

Summing up his priestly and food-centric life, Father Marino said, as a kid, he had always wanted to be a priest and a marine biologist, rather like a Jacques Cousteau with a collar. The great Catholic principle of “both/and.”

Father Marino said that he usually makes this the day before baking and serving to allow the flavors to mingle and set. He also noted that the word “parmigiana” doesn’t refer to the cheese but comes from a Sicilian word for weaving or tile-laying.

Cut the eggplant into 1/4-inch to 1/3-inch thick slices lengthwise, and set aside. Put the flour and the eggs in separate pans. Season the flour with salt and pepper to taste. Heat less than 1 inch oil in a frying pan to 375 degrees. Coat the eggplant slices with the seasoned flour. Dip the slices into the eggs and let the excess drip off.

Carefully place three slices of eggplant in the hot oil and cook till lightly golden, turn once, and drain on a rack. (Blot excess oil as they cool).

To make the sauce: Heat the olive oil over medium heat and add the garlic, cooking until lightly golden. Remove the garlic and add the tomatoes, oregano, and the salt and pepper. Simmer for 20 minutes.

Put a thin coat of sauce at the bottom of the baking dish. Arrange the parmigiana (eggplant), and use the sauce sparingly. Arrange one layer of eggplant at the bottom covering the whole surface. Cut one or two of the less attractive slices into pieces to fill the gaps. Dab and spread a thin layer of sauce on top of each eggplant slice. The goal is to make four layers, without using all the sauce (unless you prefer a “juicier” parmigiana than I do).

Sprinkle grated pecorino and shredded mozzarella evenly over the sauced slices. Once you place the second layer of eggplant slices, take a few paper towels to both blot the oil and press down on the evolving layers. Repeat until you reach four layers of slices, sauce, and cheese.

Preheat the oven to 400 degrees. On the day I’m serving this, I take the parmigiana out of the fridge a couple of hours ahead of time and bake for 45 minutes at 400 degrees until bubbly and lightly browned on top. Let sit for at least 15 to 30 minutes before serving.